New Delhi, 07 April, 2020 : Dubai based Immigration consultancy - Vazir Group has announced a Free ‘Immigration Through Invest Mentoring Tour’ along with consultancy sessions in Delhi, Ahmedabad, Chandigarh and its neighbouring cities later this year. The Expert organization that has been in the immigration business for over a decade, has successfully assisted over thousands of families to immigrate to their destinations of choice.

The Company specializes in Immigration for Investors & Entrepreneurs and the Canadian Foreign Worker program and has successfully ventured into multiple geographies like Sri Lanka, Bangladesh, Lebanon and Egypt over the past few years, through its offices in Canada and the UAE. It has assisted several individuals and families with their immigration intricacies. Gaetano Giornofelice, Senior Immigration Mentor, Vazir Group said,"During the India visit, Vazir Group will be introducing aspiring individuals to the Canadian Foreign Worker program where individuals can move to Canada in as early as six months and for as little as 50,000 dollars, which is about Rs 25 lakhs and the Canadian Entrepreneur Program that grants permanent residence while the applicant is in their home country. What's more,  the Canadian Immigration for Entrepreneurs can be procured in  record processing times."

It is noteworthy that the number of Indians who became permanent residents in Canada increased from 39,340 in 2016 to 80,685 in 2019, through the first 11 months of 2019, an increase of more than 105%, according to a National Foundation for American Policy (NFAP) analysis of Immigration, Refugees and Citizenship Canada date. Full-year Canadian statistics show more than 85,000 Indian immigrants in 2019.

The Vazir Group has also unveiled its exclusive Cyprus immigration program at a cost that is over 75% less than that prevailing. The investment which is mainly in the real estate sector normally costs between 2.5 to 2.9 million Euros. However, Vazir Group is the only consultant across the region that offers the same immigration at a mere 6,88,000 Euros through a financing program.

Gaetano Giornofelice further said ,"In spite of the comparatively high level of investment required, Cyprus remains a leading choice for business professionals across the region owning to the passport’s powerful status. Our exclusive program now makes the EU citizenship even more accessible for a wider cross section of applicants. In addition to Cyprus, we have devised similar programs for Greece and Turkey, which obviously come at a fraction of the cost. We aim to make the acquisition of residencies more accessible for desirous applicants through our experience and service network across these regions.”

The Vazir Group Consultancy series of events are scheduled for later this year. It is pertinent to state here that  the India venture will be a prelude to establishment of Vazir Group's largest branch office in India.

Sums up Giornofelice, “India is undoubtedly a bustling pool of aspiring talent and ideas and we have been fortunate enough to assist several applicants in securing their future through our Dubai offices. However, realizing the recent surge and increase in investors from India, a service on homeground was the obvious move. Our team and process involves our in house legal professionals, documentation auditors with governmental experience and expert consultants that allow us to maintain our  99% + success rate for desirous applicants.”

Popular posts from this blog

India Book of Records: Advita sets record for being the youngest to narrate 206 bones 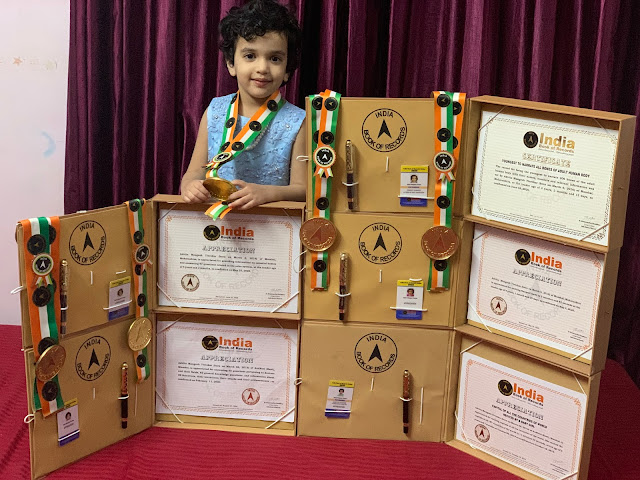 A four years old baby girl, Advita Mangesh Tivrekar has made five unique records at this tender age. The achievements have got place in the India Book of Records. The child has a special talent of memorising hundreds of facts without any fail. She can answer a variety of questions related to general knowledge. Advita (born on March 6, 2016) is appreciated for answering 32 questions pertaining to doctors and their fields; 62 general knowledge questions and information about 20 Scientists, their inventions, their awards and achievements. The baby recited Ganpati Aarti in 2 minute 45 seconds at the tender age of 4 years, 1 month and 29 days. She is from of Andheri (East), Mumbai. Advita provided information on celestial bodies and answered 47 questions related to the solar system, at the age of 4 years and 2 months. The record for being the youngest to narrate 206 bones of the adult human body with their names, numbers and relevant information was set by Advita at the age of 4 years
Read more 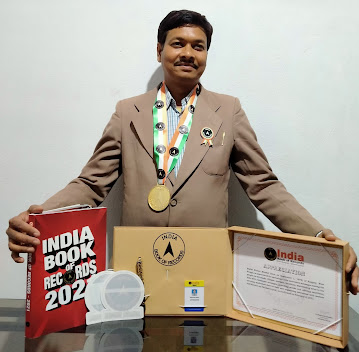 Raiganj:  Biplab Kumar Mondal of Karnajora, Raiganj, Uttar Dinajpur, West Bengal , has received appreciation from the India Book of Records (IBR) for spreading Covid awareness messages among the people. Mondal spread this awareness in the villages, markets, localities by distributing kites to the kids with awareness messages written on them, by providing masks and offering sanitizers. He also delivered medicines from door-to-door and organized awareness by displaying posters and banners on the motorcycle. Mondal, born on September 1, 1978, said, “I started my activities from the very beginning of the spread of Covid-19 in our country. I went out on my motorcycle, hanging few banners and posters on it to make people aware. I taught the passers-by how to make a mask with tissue paper and a rubber band. I also distributed handmade masks and sanitizers to the common people, frontline warriors, health workers and drivers.” The man with a big heart supplied essential medicines door-to-
Read more 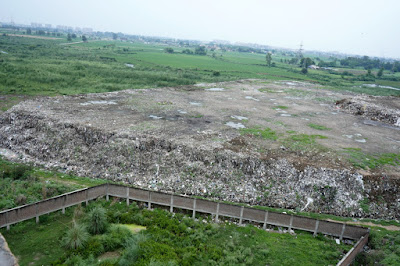 Mohali: T he Punjab & Haryana High Court in its latest order, has directed the Punjab Government to file the Status Report by 9 th December, 2019 in the shifting of Mohali Dumping Ground to a village near Dera Bassi. The High Court bench of Justice Daya Chaudhary and Justice Sudhir Mittal recently called for the status report in view of the undertaking given in affidavit by Mr Suresh Kumar, Principal Secretary, Department of Local Government, Punjab on 01 May, 2012. The affidavit was given about the time schedule for setting up the solid waste management facility at village Samgauli near Dera Bassi. It was stated that 16 months would be required to complete the process after acquisition is completed with delivery of possession with contractors.    The Residents Welfare Society (RWS) of Punjab Small Industries & Export Corporation (PSIEC) Housing Complex, Mohali has raised its demand of shifting the dumping yard from Sector 74, industrial area, as was assured
Read more

ePost India
ePost India covers news from all over the country. It's focus is mainly on positive news.